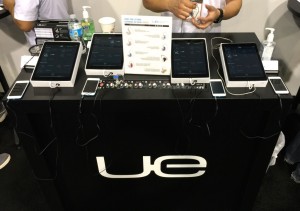 The custom side of In-Ears has always been plagued by a very elongated wait process with many hoops to jump though (including a trip to the audiologist for many). Goopy ear molds need to be made and shipped, and a manufacturing process of three or more months has become commonplace.  Ultimate Ears is looking to change all that.

We got a chance to see the first steps of this new process at last year’s CanJam at Rocky Mountain AudioFest, which addressed both construction times and the somewhat difficult process of selecting the CIEM product that was right for you. Check out the details in our post [here]. At NAMM, UE was showing off how they have even further refined the process. Gone was the large magical black box that allowed you to switch between every custom IEM model without removing the earpiece. Its new replacement is a more presentation-worthy iPad setup with a touch interface simple enough for any drummer to understand.

Moving away from traditional methods, UE now employs 3D printing into the process to speed things up. To put this into perspective, the manufacturing time for my UE 18 PRO was 3 days after the order was placed at RMAF. While this may not be a typical turnaround for the average consumer, it still gives you an snapshot of the possibilities. Michael Dias of UE let me know that the goal is to ship within 5-7 business days, with a wait of 2 weeks or so for time periods with a high volume of orders (like after an audio show or NAMM). 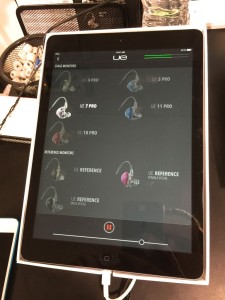 So with a new viable manufacturing solution in hand, Mike and UE manager Philippe Depallens decided to take things a step further by addressing the silicone ear mold inconvenience that could easily be seen as one of the biggest hurdles for this type of custom product.  At Rocky Mountain they were still utilizing a cool, yet mold-based 3D scanner to import blueprints of your ear into the digital realm, then whisk them off to the factory to have them adjusted and refined (still in the digital realm). A natural progression was of course to get 3D scan of your ear directly from the source. Several outside companies have been exploring options and different technologies in which to do so. UE chose to partner with a company called United Sciences. 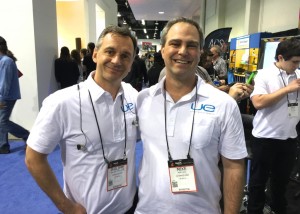 United Sciences is headed up by COO Craig Jones and CSO Karol Hatzilias and was started with a military grant for research. The scan they created does not require any direct contact with the ear. Called the “Efit Station” the probe-like device used to capture information does so at a 30 gig/second rate across a standard USB 3 connection. A diffused blue light helps record the data and delivers the 3 dimensional image to the computer station. 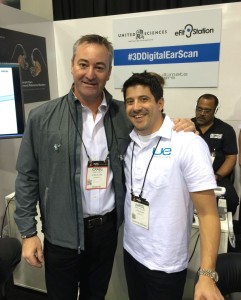 According to Craig, this image is reported within 99 microns of accuracy, whereas traditional silicone molds can often only be accurate up to 200 microns and are subject to more deforming (due to the physical nature of impression taking).

So what is the scanning process actually like? Similar to its silicone counterpart it starts with a simple ear check and cleaning, if necessary. No need to add compensation for wax buildup in your ear canal. 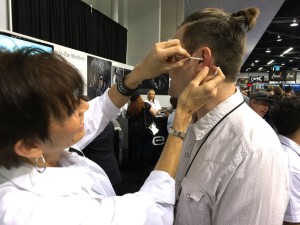 The scanee then dons this interesting headband pictured above, which allows the scanner to find its relative location in space.

The embed above shows scan in action. With traditional molds I personally am not a fan of the last little bit of space that gets touched in the ear canal when they jam the cotton dam in to block the silicone, the experience has always been a bit weird and sometimes uncomfortable. With this scan there was no discomfort, no physical contact with any device for that matter… just a yellow 3D image of my lovely ear canal. 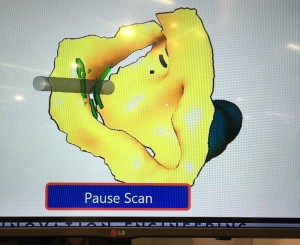 With the simplicity of this new process, Craig feels the Efit Station could be easily implemented retail establishments (like in guitar stores) across the country. Again, the whole idea is great stride in the right direction for one of the best ways to listen to music on the go and on stage. Major props to both UE and United Sciences for being the first companies to get the end-to-end consumer experience off the ground.