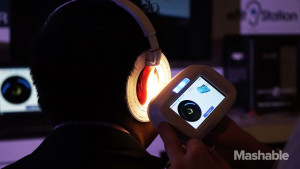 LAS VEGAS — There’s nothing worse than having an amazing set of in-ear headphones constantly fall out. We’ve all felt the frustration when those silicone buds pop out during a jog or after a big yawn.

Many audio companies have tried to counter the issue by offering jumbo-sized silicone tips. While they do stay in the ear, the jamming can be uncomfortable.

With their partner United Sciences, the audio and infotainment company developed headphones that seal the ear just right, allowing for optimum fit, comfort and sound.

“This is the beginning of our innovation efforts into the world of ‘mass personalized’ wearables, that can be fine-tuned to individuals’ physical and physiological differences,” said I.P. Park, Harman’s executive vice president and chief technology officer. “Such custom-fit earpieces will improve current biometrics by reducing the processing power required to filter noise because of bad contact with the skin.” 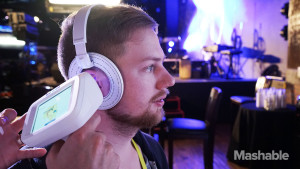 “It’s a laser triangulation — there are actually three different scanners working at once,” Hatzilias explained. “One is tracking the movement of your head, and then there is a ring laser and a line laser — the ring is for the canal, the undercut and the concha, and the line is for the majority of the ear’s outside.”

Harman hosted live demonstrations at their booth throughout CES. I was dying to find out how accurate the fit could be, so I gave it a try.

The movement tracker, shaped like a regular headphone, was stretched across the top of my head and placed around both ears. Then, the laser scanner, which looked like an otoscope, worked to create a digital map of my inner and outer ear. The resulting data file containing exact dimensions was sent to an image processing software on a computer. 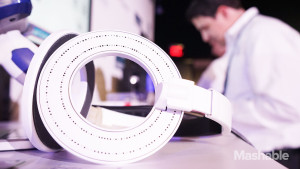 The CAT file was transformed into a 3D printable template, and I watched as a MakerBot Replicator Mini printed the shells of my custom earpieces.

Once the shells were produced, they were injected with silicone. The hardened final product was fastened to JBL headphones and given to me. Conclusion: They fit perfectly snug in both ears. I did a few jumping jacks and ran a lap around the room to be sure. I also learned that my right and left ears are very different in shape.

The best part was that it was done in under an hour. 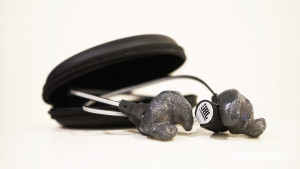 Previously, this technology has been used to improve the hearing aid industry. Due to these innovative collaborations between science and headphone companies, it’s an exciting time for consumer audio.

“This is the next generation of in-ear devices. With this 3D scanning technology, we can get more reliable signals than anyone else out there,” said Sam Kellett Jr., chairman, CEO and co-founder of United Sciences. “The ear’s the place to be.”